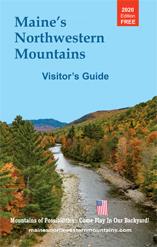 Warmer weather is finally here, and white-tailed deer are found all over Maine’s Northwestern Mountains Region. Vast tracks of forest and the open fields and streams of Maine’s Northwestern Mountains Region offer outstanding habitat for the small and big game. You may see a deer at any time of the day or night - open fields, along the streams that border the highway or on someone’s lawn. Be sure to have your camera ready as that special sighting can be gone in seconds.

Small and graceful, the whitetail takes its name from its long, broad tail, which is brown above and white below. When alarmed, they bound away in leaps with their hind legs hitting the ground before their front legs, and their tails held high, displaying the white underside of the tail. This behavior is called “Flagging” and serves to warn the other deer of danger. In Summer males develop antlers that consist of the main beam that curves sharply forward with individual tines rising vertically from it. Mature bucks generally have three to four times per side. Avascular skin called “velvet” initially covers the antlers. As the antlers mature, the velvet is sloughed off exposing the bony antler. Whitetail bucks grow antlers in the summer and usually shed their antlers in the spring after mating season.